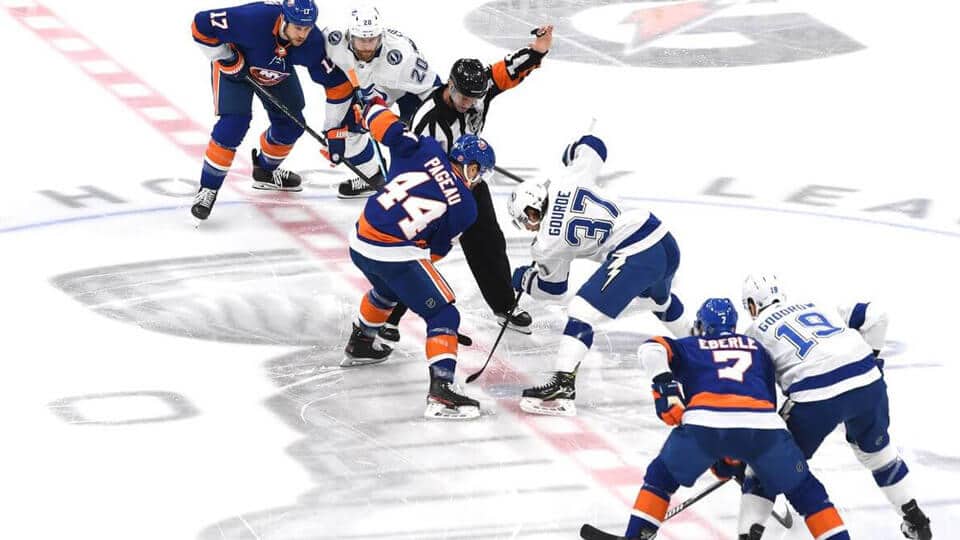 The New York Islanders and Tampa Bay Lightning are now both just two wins away from advancing to the Stanley Cup Final. For the second time in as many seasons, the clubs are meeting in the semifinal round, and nearly every game has gone down to the wire.

Game Four on Saturday saw a heroic shot block from Ryan Pulock with just seconds remaining in the third period to preserve a 3-2 lead and secure the win, evening the series at two games apiece. In 10 semifinal games against each other the past two seasons, six Islanders-Lightning games were decided by one goal, including three such games this season.

New York’s offense rolled through the first two rounds, scoring on nearly 10% of their 5-on-5 shots and scoring more goals per game than any semifinal team. However, Andrei Vasilevskiy’s stellar play in the Tampa Bay net has cooled the Islanders’ attack.

The Islanders have scored eight goals total in this series (2.00/game). Entering the series, that total was at 3.58 goals per game.

The fourth line of Matt Martin, Cal Clutterbuck, and Casey Cizikas has been solid, with Martin and Clutterbuck each scoring in the series. Mathew Barzal led the Islanders in points in the regular season (17 goals, 28 assists) and has scored goals in six of the past eight games. However, he cannot continue to be the only source of offense.

Jean-Gabriel Pageau does not have a point in this series. Anthony Beauvillier finally found the scoresheet with an assist in Game Four, but he hasn’t scored a goal since Game One of the Boston series. Similarly, Jordan Eberle has just one goal since the end of the first round.

The Isles need an offensive breakthrough. The sooner, the better.

After nearly giving the game away in the second period on Saturday, the Lightning surged back in the third to cut the lead to 3-2. However, they couldn’t get a third puck past Semyon Varlamov, resulting in a rare two-goal output for one of the league’s highest-scoring teams for each of the past five seasons.

Brayden Point scored to set a franchise record postseason goal-scoring streak. Point has lit the lamp in each of his last seven contests, marking the longest postseason goal streak for any NHLer since Claude Lemieux with the 1997 Colorado Avalanche.

Nikita Kucherov has continued to dominate as well, leading the playoffs in points (five goals, 19 assists). With Victor Hedman a constant offensive threat from the blue line (one goal, 13 assists) and Erik Cernak (no goals, eight assists) showing strong two-way elements to his game, the Lightning can keep pace with anyone.

On to the Pick

In front of a raucous home crowd, the Lightning are the pick to win Game Five. However, consider taking them on the puck line for better betting value. Tampa Bay is -186 on the moneyline but +143 on the -1.5 puck line.

With a chip on their shoulder after the Game Four loss, you can bank on the Lightning to pour it on in Game Five with their best offensive showing of the series.

Ryan has been one of the leading sports business & iGaming professionals for over 15 years. He started as a freelance writer and now operates one of the top sports content agencies around, Knup Solutions. He has literally written 10,000 plus sports and betting related articles across the web.